The recipient for this full-sized fennel quilt played a LOT of soccer all over the world as well as rowing crew in the US. 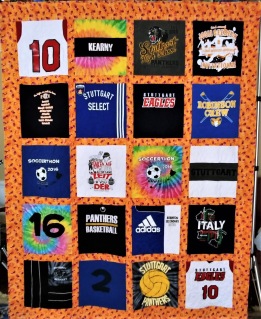 I was asked specifically to applique the patch on this Stuttgart shirt as it indicated a championship for this team.

This block was a combination of sections from her Stuttgart Eagles UnderArmor shirt along with a front pocket design of the tie-dyed grey shirt.

Singlets or middies are too narrow for a full block due to the armhole cutouts.  Hence I added red knit fabric so it could square off to the 14.5″ block. 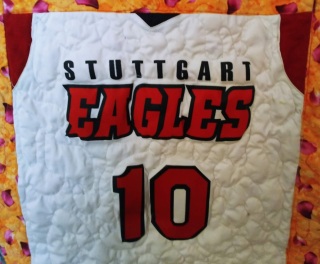 As always, I felt I really knew the recipient by the time I finished the quilt.

This queensized quilt is made for an Oakton alumna/current Duke Blue Devil. She will be getting married to another Duke grad shortly after graduation so this will definitely fit in their decor. 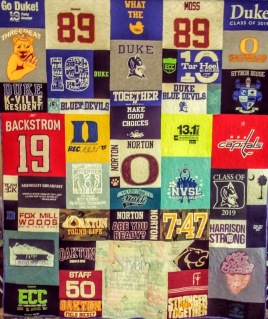 She wanted a more random layout than most so the blocks were cut in multiple sizes.   Neither sashing nor borders were desired so it was simply edged with binding.

This shirt was completely covered with quotes written in puffy paint.  This was a spirit shirt made with her cross-country team.  The quotes ran onto the sleeves so the block ended up being a fat apital T as opposed to the typical quadrilateral.  The recipient was also a swimmer so we incorporated her team bathing suit.

The recipient is very devout so in addition to the  shirts from religious camps and teen organizations, the backing was pieced as a basic cross in Duke colors.

This quilt is for the wife of a dentist.  She is a runner extraordinaire competing in races from 10Ks to full marathons.  This is especially admirable considering she has 3 kids and is a physical therapist. 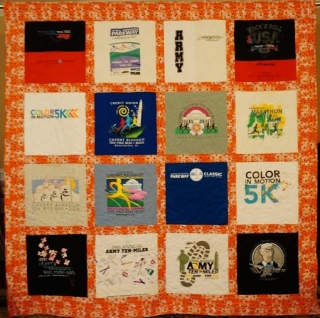 All of the shirts are from races in or just outside the District.  Consequently many of the racing designs incorporate images of gorgeous cherry blossoms or the stately monuments.  I found a fabric that evoked a feel of cherry blossom pink along with her favorite shade of University of Tennessee orange. 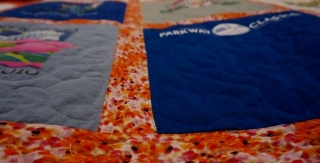 My “guest photographer” took the pictures for this quilt, hence the unusual angle of the above photograph.

Instead of putting a label on the back, we used some fun dental-themed fabric in one of the blocks that was signed by the husband and kids.

The dad of the Hanukkah pillow recipients liked their bolsters so much that his wife decided to commission one for him as well.

The love for all things Cincinnati runs in the family. From major leagues to the minors to the college and high school teams….

The wedges on the Indian Acres are from the Bar Mitzvah yarmulkes of the two sons. Not seen but also definitely included is the daughter’s Bat Mitzvah covering. 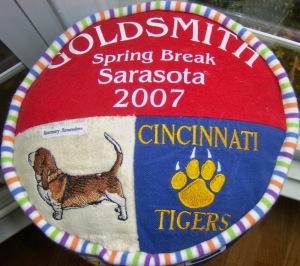 The Basset Hound was embroidered on a towel, the Who Dey is the Bengals cheer.  That particular item is a hand-painted tie.  The striped piping is from long johns that were worn while skiing.

This is a quilt for a dad who coaches his son’s baseball team.  It’s been so long since my own played baseball so I am not sure if this is travel, Babe Ruth, or some other type of league for middle schoolers.

The dad coaches the Mets but LOVES the Bronx Bombers, hence the choice of NY Yankees fabric 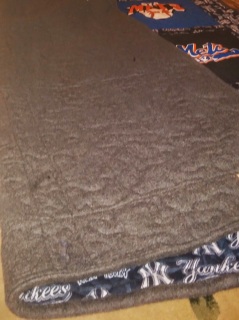 Since this is meant as a lap quilt, we used polarfleece as the backing and sashing.  Polarfleece plus batting makes it very easy to see all the quilting that was done (in this case, tons of stippling).

This quilt is for a recent Fighting Irish alumna.  Like most Domers, she is an avid football fan and was the proud owner of MANY season and bowl game shirts.  Not opting for sashing between the blocks makes a very different look.

My trademark has been to keep what I call architectural elements of garments when possible.  The zipper hoodie square is quilted only on the perimeter, leaving the middle open so the shirt can be unzipped to see the 3 mini designs hidden underneath, 2 of which were from her academic department.

The bottom block was made from a nylon flag.  The recipient actually interned for the Discovery Channel while an undergrad.

Here is the Bengal boss inspecting my basting to make sure I am pinning the layers correctly.

These bolster pillows were given to siblings on their first night of Hannukah,  The brother followed his sister to the University of Michigan where they are both Wolverines.

As usual, we were able to incorporate not just t shirts and sweatshirts, but also a Bengals fleece scarf, a silk tie, a potholder  and a satin yarmulke. Both kids were very busy as it was difficult to include all the shirts.

The yarmulke was from the daughter’s Bat Mitzvah.  The seams of the curved panels were undone and moved to 2 groups of 3 panels each.  We were then able to incorporate the polo shirt of the overnight camp that both kids attended as campers and later as staff.  The image doesn’t show it as the light was too strong but the other white triangle was from the lining of the yarmulke which had been stamped with the Bat Mitzvah girl’s name and date of the ceremony.

The son’s quilt also used a camp staff shirt as well as the tie from his Bar Mitzvah.  The tie was in an actual tie shape in one end of the bolster and as piping for the entire bolster.

This quilt was made for a recent graduate of Thomas Jefferson High School for Science and Technology. Jefferson is one of the top magnet schools in the country ie lots of big fish in a small pond. The recipient did not just excel academically, but he was a skilled athlete as well.  He was on both the football and wrestling teams and he was one of the founders of the power lifting team.

He asked to include his varsity letter so we did.  I was a bit worried that the inclusion would make the quilt non-washable but it did fine.  I really liked the sixth man shirt as the words are different team spirit type phrases.

He is now the third member of his family to attend Annapolis. Plebe year is a tough road despite being a double legacy so I wish this young squid the best.

Q: What do Navy Midshipmen Football players always get on their final exams?

Labels
Annapolis, College/University, Memories, Memory, Navy, Quassia, Queen, School Spirit, Sports, T-Shirt Quilt, T-Shirt Quilts, United States Naval Academy, USNA
This quilt was made for the sibling of a W&L KD.  The recipient is a University of Virginia Cavalier and a member of Zeta Tau Alpha.  I loved, loved, loved working with these shirts as so many had awesome slogans and great designs. 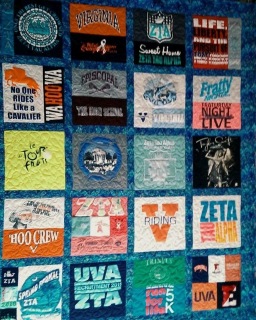 The recipient asked for polarfleece for the backing as it would make it extra-warm for her cold winters where she was relocating.  Polarfleece provided more loft which really profiled the quilting. 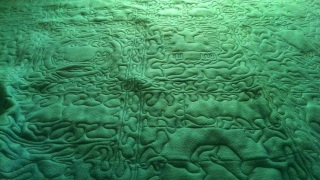 This recipient is not only a ΖΤΑ, but also a member of the UVa equestrian team and a graduate of the McIntire School of Business.

The pics for this quilt were taken by my crazy kid who thought these angles would bring a unique perspective.

Haha, I think his photographer days are numbered.
This Lavender Lapsize quilt was made for a young lady about to embark on her college adventure.  She was a Chantilly Charger from the class of 2013 and is about to become a Radford Highlander.  This was an interesting quilt to do as the girl loves purple so we wanted to make sure that the sashing fabric was not too close in shade to the various purple shirts. 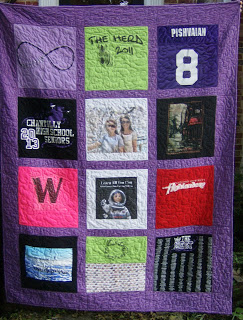 Like a lot of high school girls in Northern VA, she wanted to include a hand-painted shirt in her quilt. She must be a huge Justin Bieber fan as she made a shirt showing the Belieber Infinity symbol. The shirt is in the upper left corner.

Haha, who knew Krispy Kreme made boxers as well as doughnuts? 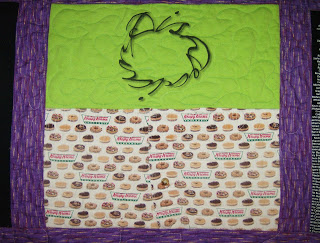